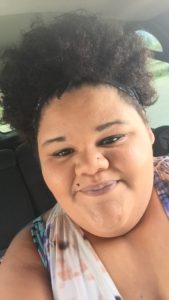 My first born child, Myesha Raven-Symone Reed. My little miracle that changed my life for the better.  A mother has more than just a physical connection that begins from the moment we feel our child in our womb, there is also an even stronger emotional and spiritual connection.

Some days I sit and reflect on the five years we spent alone, just Myesha and I. The days I spent playing with her, reading to her, the naps we shared, she was my entire world. I knew every feature she had.  From her “fish” shaped birthmark on the right side of her stomach, to the way her once “baby receding hair line” blossomed into a full thick head of curly locks.  I’ll never forget that as a baby whenever she got excited she would rotate her feet and hands in a fashion that always brought laughter and smiles to everyone who saw it.

I know as a parent of a newborn we are supposed to sleep when the baby sleeps, but at times I just couldn’t put her down after she feel asleep.  I couldn’t look away from her.  The simple fact was, I create this wonderful little miracle. She was a part of me.  She needed me and I needed her. Most would not know the countless nights I bounced, hushed and cried myself because Myesha would not stop crying and was unable to sleep because she had colic.  It was nights like these I would second guess my ability as a parent and if I was even cut out for this gig. Her father would even load her in her carseat and drive around for hours in the middle of the night to get her to stop crying and allow me to get some much needed rest.

As she got older not much changed. Most nights I found myself next to her in her toddler bed, unable to leave her alone because she was scared to sleep by herself. She would always say, “Mommy brush my hair”. So I would run my fingers along her head, down the side of her face, watching her slowly fall asleep,” as I sang her favorite songs; “Baby Mine,” “Twinkle Twinkle Little Star,” or “You Are My Sunshine.”

No matter how old she was though my gazes and stares never stopped.  The small glimpses that would cause me to catch my breath because she seemingly grew overnight.  My biggest fear was loosing her, but not in death.  It was the slow moments in life when your children grow up and slowly slip away into their own independence that scared me. As a parents we begin to see ourselves in them as they grow older. It’s thrilling and frightening all at the same time. Everything she did, the way she would sing, the way she would laugh, it all made me marvel at the gift she was. The gift I created.

What Myesha probably never knew was that even up until the age of 18, I still upon occasion crept into her room and watched her as she slept.  Brushing the stray hairs back so I could see her beautiful face.  Laughing quietly as she often slept on her back with her knees bent, one leg crossed over the other.  How she slept like that I’ll never know.

Year two after the loss of a child is when reality really hits. It seems as though once the fog of the first year lifts, reality hits like a punch right in gut. It knocks the wind out of me and leaves me breathless.  On most days I can deal with her death and hold back the tears, accepting that she’s gone. But as every holiday and every anniversary rolls around it always takes me back to that day. Today, July 17th. That silver lining attitude of “everything happens for a reason” fades quickly and I am still left with hurt and betrayl. I hate that I have to miss her.  I should be able to call or text her to see how she’s doing. Alive and well and making me laugh like she always did.  To be able to see her face to face anytime I want. I will always believe that she deserved so much more from life.

As a grieving parent some days we find ourselves unable to escape that aching pain and overwhelming sadness that comes in waves. It’s such an empty feeling that only those who have experienced a child loss would understand. At times we have to stop our minds from wondering because there because of the fear that we may sink back down into that “dark place”.  Pissed off about the way life has turned out. Pissed off because our child deserved to grow old and pass away peacefully in their sleep after a long life of achievements.  Pissed off because they deserved to celebrate all the milestones of life and us as their mother, would be able to enjoy those moments with them.  Pissed off because damn it, it’s just not fair!  Nothing about death is fair.

These days I find that I can control my emotions for the most part.  I can actually talk about her without breaking into tears.  When a child dies, it’s not something that is ever expected, nor is it ever something that we welcome.  Never do we think, let alone fathom, it could happen to us.  Undeniably though, having your child die is the worst pain you will ever go through, ever!  Mommy loves you Myesha!  FIM<3F