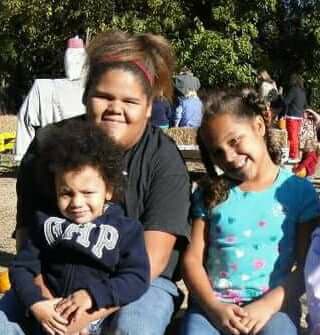 My daughter died on this day. My firstborn. The child that forever changed my life for the better.  At 6:56 pm on Friday, July 17th, 2015, I laid in a hospital bed with my daughter Myesha Raven-Symone, wrapped her in my arms just like the day she was born, said my goodbyes with her sister Chloe, and I gave her back to God. Today marks four years since I endured what would inevitably be the worst day of my life.

The death of a child is a pain so deep that it cannot be expressed in words. As the days slowly creep towards this day every year, the anger, sadness, regrets, and pain all creep back as well. To be clear, these emotional hauntings never actually leave when your child dies, they just seem so much stronger as you realize that each year when “that date” approaches, the beautiful world that was created solely for that child is now shattered.

I have had multiple dreams with Myesha over the past year. My most recent dream was on July 15th, just 2 nights ago. Myesha was sitting in this recliner and we were catching up on everything she missed lately. I was just going on and on until she said, “Hey momma, I don’t have much more time until I have to leave again”. But it was only July 15th. I still had 2 more days to hang out with her until her “death date”. So I kept blabbing on and on and the next thing I knew her head fell forward and her arm fell limp of the arm of the recliner. I ran over to her and screamed, “IT’S NOT TIME YET!!! I STILL HAVE 2 DAYS!!!” I feel to the floor in front of her and laid my head on her lap and grabbed ahold of her hand. I was instantly mad at myself for not taking what little time I did have to make memories. That I didn’t use my time wisely. Maybe because I didn’t think she was serious. Or maybe because I was in denial thinking I still had more time. Regardless, I was angry that I didn’t take pictures with her, videos of us singing or just videos of her talking in our conversation. I felt emptiness and regret. I failed yet again. It was at this moment in my dream that I realized that my child did not die on July 17th. She died the day before and I was just holding on in denial. This dream completely ripped me out of my sleep at 1 am and left me laying in bed crying for almost 3 hours until I managed to fall back asleep again.”Broken Heart Syndrome” at it’s finest. This is the life of a grieving parent that you typically don’t hear about.

So for the first time today, I opened my Facebook memories for July 16, 2015. I read the post I made 27 hours and 5 minutes before she took her last breath after I turned off her life support machine….

“I want to thank all of you for taking the time to show your outpouring of messages, phones calls, comments, support, but most importantly your much need prayers. Myesha Reed just got out of surgery and is still unconscious. She had very intrusive ankle surgery 3 weeks ago and her pain over the past couple days has become unbearable. She finally got admitted to the hospital Wednesday morning to try to control the pain, and she took an unexpected turn early this morning. She spiked another fever and became delusional. The incision site became infected, but due to the cast covering it, it was not caught. She is now septic and the infection has put her in renal failure and she became unconscious a couple of hours before surgery. Her vitals are crazy right now. Heart rate 135, BP 89/28. She will need multiple surgeries over the next 3 days. She has made it through the first surgery and is back in ICU. Please continue to keep her in your thoughts and prayers.”

Looking back now I never in a million years could or would I even predicted the outcome. I’m left asking myself over and over again if I did EVERYTHING right. If there was something more I could have done. What could I have possibly done to change the series of events? Ultimately, the answer. NOTHING. Why? Because I didn’t know. I didn’t know that you can’t always trust the doctors. I didn’t know that if you called your child’s surgeon in the middle of the night that he would choose to sleep and tell the nurses “Just wait until the lab opens in the morning and let’s run our own tests”. You know because going off the already completed test by another hospital would just be ludicrous..right!!! So my feelings of moral injustice — the understandable feeling that this loss never should have happened are completely justified.

So F- HIM!! That’s how I feel about him all the time. I remember one specific occasion that it was told to me that “this situation” was ruining his marriage. Like I was supposed to feel sorry for him. ARE YOU KIDDING ME!! MY CHILD IS DEAD BECAUSE OF YOU!! I have ZERO sympathies. As a wife, I don’t know as if I would ever be able to look at my husband the same again. A CHILD DIED!!! But hey, who am I to cast judgment or throw stones? I mean, who am I to them? No one. But who am I to Myesha? Her mother. Her mother that grieves the loss of her child due to neglectful medical care every single day as I look around a house that I raised my children in and see all the memories of a life we once had together and a future that is without her in it. A mother that has to not only figure out how to keep my shit together but also try to parent the brother and sister that she left behind who have broken hearts as well.

By the way, did you know that “Broken Heart Syndrome” is a real thing? Oh yeah! It’s often seen among parents mourning the loss of a child. It’s a condition that presents oddly like a textbook heart attack. Symptoms include crushing chest, pain, ST-segment elevation on electrocardiography, and elevated cardiac enzyme markers on lab results as a reaction to emotional or physical stress. So the body’s natural response is to release catecholamines, also known as stress hormones, that temporarily stun the heart muscle. I can tell you that I have felt this multiple times over the past 4 years. The chest pain and shortness of breath that makes you feel like your airway are closing in your throat. It burns. You are left gasping for breath as this often comes on during or after intense crying.

When a child dies, that promise of a bright, happy future dies too. Marriages. Grandbabies. Watching my children raise their children together. That’s all lost too. The birth of life with the promise of a future is all destroyed. All that is left is the new commitment to living, no matter how hard or impossible it may seem at times. You do survive. However, the experience itself will change you.

Eventually, at some point, you will find that grief will not consume your life as much as it did in the beginning. There will always be those times and moments where we struggle emotionally. I try to find ways to commemorate her, like the “Forever In My Heart Friday Scholarship Fund” or naming my new business, Raven Enterprises, LLC after her. We also try to find comfort that revolves around the things or places she enjoyed most and the songs we listened to frequently that brings back memories.

No matter how much time goes by, we will continue to mourn for our entire lives. We are not the same people that we were before July 17th, 2015. We have had to pick up the pieces of our broken lives and find new strengths. It has been said that coping with the death and loss of a child requires some of the hardest work ones will ever have to do. No doubt this has been the hardest 4 years of our lives and counting…

Mommy loves you Myesha. To the Moon and Back Again.

Forever In My Heart Friday. FIMHF